A demonstration of joint police training between China and the Solomon Islands on July 1, 2022. Photo: Courtesy of the Chinese Police Liaison Team

A public demonstration showcasing Chinese police tactics and techniques was held earlier this month in the Solomon Islands, which showcased the achievements of China-Solomon Islands cooperation in policing and security. .

Recently, Police Commissioner Third Class Zhang Guangbao, who leads the Chinese Solomon Islands Police Liaison Team, shared many details about the training and hard work of the Chinese and Solomon Islands police during the demonstration, during an exclusive interview. with the Global Times.

“Police cooperation between China and the Solomon Islands is not a threat to regional security and stability, but has effectively promoted these elements,” Zhang said, noting that some countries “feeling threatened” is because they “don’t want to see China’s influence in the South Pacific region.”

Now, more than 180 police officers from the Royal Solomon Islands Police (RSIPF) and the Solomon Islands Correctional Service (CSSI) have completed their training with the Chinese police. Their ability to maintain social stability, as well as their confidence and morale, were boosted. Trust and understanding between the two countries has also grown throughout the process.

“Shocked, sad and furious.” These are the sentiments expressed by Zhang after he and his teammates saw the ruins of Chinatown in Honiara, capital of the Solomon Islands.

Chinatown was not only the Chinese police liaison team’s first stop when it arrived in the Solomon Islands on January 26, but also a reason for them to be in the country.

From November 24 to 26, 2021, severe social unrest occurred in the Solomon Islands. Chinatown in Honiara was vandalized and looted, leaving hundreds of overseas Chinese nationals homeless. Their assets from decades of hard work instantly went up in smoke.

In total, the riots caused losses worth $150 million and left more than 1,000 people unemployed. Post-disaster reconstruction has been strained, which has also severely traumatized Solomon Islands’ economic and social development.

The riots were not dealt with effectively, exposing weaknesses in the police force and a lack of equipment and training in the island nation with a population of around 0.72 million. Under such circumstances and at the request of the Solomon Islands government, the Chinese government quickly dispatched a liaison team to Honiara to support capacity building within the police force to maintain social security and stability.

In December 2021, January and February 2022, along with COVID-19 prevention supplies, China also sent police equipment and supplies to the Solomon Islands, according to the Chinese Embassy.

The Solomon Islands government’s invitation of Chinese police to the country shows its confidence in China. Since the establishment of diplomatic ties in 2019, the islanders have witnessed China’s support and assistance to the country, believing that China will sincerely help them, Zhang said. 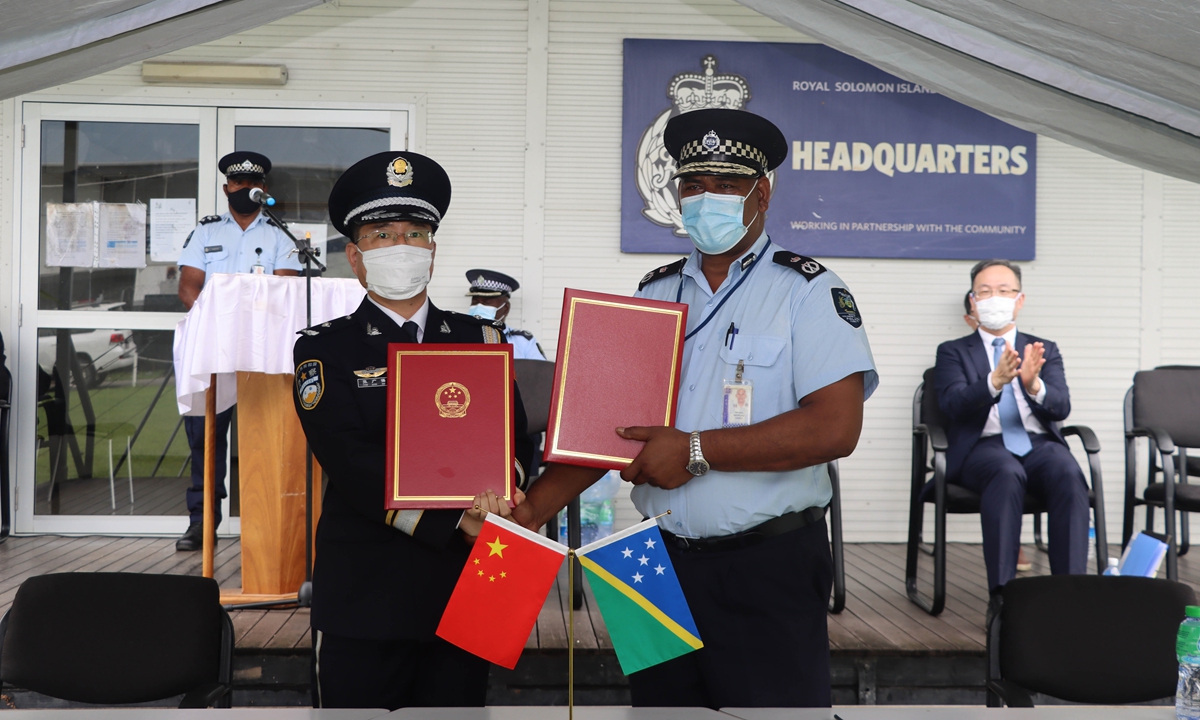 The five-month joint training, which began on March 14, has seen not only the officers resolve to make great efforts to meet challenges and improve their abilities, but also trust and friendship grow between the two sides. .

The main task is to help the local police to build their capacity in public management, riot response, maintenance of social stability, law, order and security, and protection of the life and property of all residents of the Solomon Islands, in accordance with the working principles of “professionalism, efficiency, friendliness” and “openness, transparency and goodwill”.

The training began with unarmed combat skills and was enhanced with the use of police equipment and tactics, including how to react to attacks.

Martial arts were a highlight of the training. “We combined martial arts and grappling, and our local colleagues were very interested, because of course they all know Bruce Lee and Jackie Chan,” Zhang said. “We taught them martial arts moves that they had never seen before.”

Zhang said the training provided by the Chinese police was not only professional and practical, but also sincere and wholehearted.

After the training, the local police officers were tested and received certificates. Zhang commented that the July 1 protest showed “better results than expected.”

The Solomon Islands Police worked hard during the training. Zhang recalled that the police force was subject to public disbelief and criticism due to its inability to bring riots under control quickly, which caused pressure and frustration. The training not only improved their abilities, but also boosted their confidence and morale. The effect is evident and has already helped improve the social order in the island nation.

Moreover, China has provided enough equipment to the Solomon Islands. Now, the 1,500 members of the Royal Solomon Islands Police have been provided with the said equipment, which could enable them to respond in time to cases of crimes such as robbery and looting.

The local Chinese community, often a victim of social instability, appreciated the results of the training the most. “I was surprised to see such a great effect after a short period of training,” Liu Ze, secretary of the Solomon Islands Chinese Association, told the Global Times. “Now we Chinese people here have acquired a greater sense of security. Our association is setting up a contact center between the police and the locals.”

The Solomon Islands and China have many environmental and political differences, as well as cultural and economic conditions, which have posed challenges for Zhang’s work.

He admitted that trust and understanding were built gradually, especially since many local people did not understand China. Additionally, while in the Solomon Islands, they experienced two major outbreaks of the COVID-19 outbreak, so they were only able to hold small-scale training sessions. The high temperature, mosquitoes, insects and earthquake also presented unique challenges to Zhang and his teammates.

But the difficulties came not only from the island itself, but also from outside. Attacks and slanders from Western countries on police cooperation were frequent.

Some Western media, for example, had highlighted the perceived problem of replica weapons used in training, demanding verification whether or not they were real weapons. “They were aimed at inciting public opposition,” Zhang said.

The RSIPF quickly refuted these Western claims and showed support for the joint formation. “These things do not threaten the security of this country in any way so far, except that they help the RSIPF to develop their tactical knowledge and capabilities,” Police Commissioner Mostyn Mangau said in a statement.

Some Western countries have seized the opportunity to tout the “China threat theory”, trying to taint normal cooperation and exchanges between China and Pacific island countries.

In response, Zhang said these smear tactics are all based on geopolitics. “They (Western countries) judge from their own point of view, which is neither objective nor fair.”

According to Zhang, the Chinese police liaison team has been recognized and welcomed by the local government, the police and the public. “They could see and touch our efforts,” Zhang said.

“Furthermore, after the riots, it is understandable and natural for China to send personnel to assist local police and protect Chinese nationals overseas. Neither local police nor assisting Australian troops have been able to protect Chinatown in 2021, and we are not turning a blind eye to vandalism, arson and looting that may happen again in the future,” he said.

“Why were there riots in the Solomon Islands despite decades of help from other countries? Zhang asked. “The police cooperation between China and the Solomon Islands is not a threat to regional security and stability, but has effectively promoted regional security and stability. As for some countries ‘perceiving a threat’, it is because that they don’t want to see China’s influence in the South Pacific region, and are only trying to maintain control and influence the South Pacific region to achieve their own goals.”

In recent years, China has carried out fruitful police cooperation with Papua New Guinea, Fiji, Vanuatu and other Pacific island countries, and made many achievements in combating transnational crime and promoting anti-epidemic cooperation. The results effectively maintained regional peace and stability, according to Ambassador Li.

-In 2014 and 2018, the PLA Navy hospital ship Peace Ark visited Fiji, PNG, Tonga and Vanuatu and carried out medical aids.

-In September 2015, delegations from Fiji, PNG, Tonga and Vanuatu were invited to China to attend the military parade.